What We Know (and Don’t) About Catching Covid-19 Outdoors 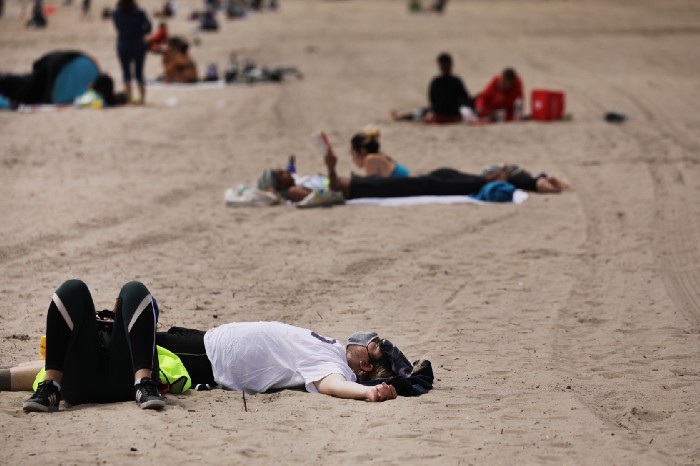 While cases of Covid-19 surge to new highs nationwide, responsible outdoor activities are being encouraged. From California to New York, states and cities are shutting down indoor dining (or keeping it closed) while allowing outdoor service and keeping beaches and parks open, too. Governors are coming around to the view that scientists have been espousing for months: The coronavirus transmits more easily indoors than outdoors.

“The risk is definitely lower outdoors,” says Kimberly Prather, PhD, an atmospheric chemist at the Scripps Institution of Oceanography. “The primary reason is there’s just such a large volume of clean air.”

Imagine a tablespoon of saltwater dispersing in a bucket of fresh water versus in a small glass of water, she suggests. Sunlight has also been shown to kill the coronavirus, she says, although the effect takes a few minutes.

However, outdoors is not totally safe, and images of crowded beaches and maskless pool parties over the Fourth of July weekend have health experts worried that already skyrocketing infection rates will just get worse. After all, an infected person’s coronavirus-laden respiratory exhalations don’t always obey the six-foot rule.

“I’m wearing a surgical mask at all times and I’m farther away than six feet. I’m at least 10, indoors or outdoors,” Prather tells Elemental. “Distance is your friend. Always.” Prather admits she’s more cautious than many people, both because of what she knows and what remains unknown.

“The risk is definitely lower outdoors. The primary reason is there’s just such a large volume of clean air.”

How the coronavirus gets airborne

The coronavirus that causes Covid-19 can be passed along by handshakes or after landing on surfaces, and maybe even through human feces. But the primary means of spread is thought to be through the air, especially in poorly ventilated indoor spaces, and especially within six feet.

Here’s what happens: When we breathe, talk, sing, cough, or sneeze, we spew droplets of various sizes, from the visible to the microscopic. Scientists recently measured droplets from a cough flying 16 feet indoors and sneeze droplets traveling 26 feet. Each droplet contains moist mucus and saliva, plus salts and proteins, cells from the respiratory system, and other bodily stuff. In a person infected with Covid-19, the droplets can also contain super tiny coronavirus particles. The measurements are in microns, or millionths of a meter.

Upon hitting the air, the droplets begin evaporating immediately. Larger, heavier ones tend to fall quickly. Others lose most or all of their moisture and shrink down to as small as five microns or less, a mere nucleus of the former droplet. Somewhere around this rough threshold, the droplets become aerosols, able to stay suspended in the air for minutes or hours, says Prather, who explained it in a recent perspective article in the journal Science.

Indoors, virus-infected aerosols can spread throughout an entire room and effectively create an invisible, infectious cloud.

How long the coronavirus remains infectious in aerosols is an open question, however. A recent study in the New England Journal of Medicine suggests the virus can remain viable in aerosols that can drift about for many minutes or hours. In an enclosed space, they’ll be constantly replenished as long as people keep breathing. If individuals are talking loudly, shouting, or singing, even more viral particles are spewed.

“It’s not about one inhalation. It’s about sitting there and breathing it over time.”

“In a poorly ventilated indoor environment where you need to shout to be heard, the six-foot separation rule will not be effective,” says Dr. Donald Milton, an environmental health professor at the University of Maryland and an expert on airborne infections.

Why outside is less risky

Whether you come down with Covid-19 depends on two primary factors: dosage (how many viral particles you inhale) and duration (for how long you inhale them). The thresholds are not known. The U.S. Centers for Disease Control and Prevention says a person should be tested or isolated if they’ve been exposed to someone infectious, closer than six feet for at least 15 minutes, regardless whether either was wearing a mask or not.

“It’s not about one inhalation,” Prather explains. “It’s about sitting there and breathing it over time.”

Aerosols will follow circulation patterns — they drift with the wind, in sort of a plume. Prather uses cigarette smoke as an analogy to understand the plumes you might encounter: “If a person was smoking and talking to me, where would I sit, to not breathe their smoke?”

A recent computer modeling effort illustrates what can happen when someone coughs outside. Taking into account evaporation and air movement, it showed that a slight breeze of 2.5 mph carried a plume of droplets 18 feet in five seconds. A stronger wind keeps the droplets higher off the ground, but they’ll disperse more across the same distance, the scientists concluded in the journal Physics of Fluids.

The point is: Whether at an outdoor restaurant or the beach or strolling the boardwalk, proximity to others and environmental conditions matter. Even with a mask and several feet of separation, you wouldn’t want to be just downwind from a group of people who are singing or shouting. “If you’re walking behind a group of people who are talking, you have to think about that, too,” Prather says.

There are other factors that may further lower risk outside. Simulated summer sunlight kills 90% of the coronavirus particles in aerosols within six minutes, according to a June 11 study in the Journal of Infectious Diseases.

Heat and high humidity are bad news for many viruses, which is one reason the flu subsides in summer. But it’s not yet clear whether or how quickly they disable the coronavirus. One indication: Unlike the flu, Covid-19 has been raging throughout southern states despite the heat of summer. The simulated sunlight study found no evidence that humidity alone kills the virus.

Being outside is just one layer of protection

No single protective measure is foolproof, but in a layered approach, they add up. Prather explains one aspect of this with some funky math: If two people who are near each other are both wearing masks that are, say, 50% effective, the combined efficiency between them is 75%.

If they back up, that helps. If they’re outside, that’s even better.

“There’s a reason why we have stacked up so many imperfect measures” to reduce risk, says Dr. Neha Nanda, an expert on emerging infectious diseases at Keck Medicine of the University of Southern California. “Each lever has an additive benefit and they complement each other, and all are imperfect. So at a given time, we want to apply all if possible to reduce the risk.”

One hint that outdoor gatherings can be relatively safe: Protests around the country, which started in late May and most often involved a lot of mask-wearing, have not yet produced any known, significant outbreaks, based on early data from several cities. Experts worry they still might, but even in New York City, no significant protest-related surge has yet been identified as of July 1.

Because so many younger people are now getting infected, often passing the disease along without knowing it, because they may not have symptoms, prevention requires constant vigilance from everyone in a community, the experts say.

Simulated summer sunlight kills 90% of the coronavirus particles in aerosols within six minutes, according to a June 11 study in the Journal of Infectious Diseases.

The messaging on all this has been confusing, scientists admit, in part because it took time to figure out the behavior of a novel virus that emerged just six months ago. Every virus has different means and levels of infectiousness and durability. Additional confusion has been created by suggestions that there’s a firm cutoff between droplets and aerosols. Rather, experts agree, there’s a continuum of sizes, therefore a range of distances across which the virus might be carried.

As one example of the evolving advice, even the World Health Organization has been reluctant to acknowledge what the vast majority of experts now agree on, based on a letter sent to the WHO this week by more than 200 scientists: The coronavirus can spread via airborne, aerosol-sized respiratory particles well beyond six feet. The scientists admit direct evidence for this is lacking — you can’t gather people, spray the virus all around, and see what happens.

“Is aerosol transmission possible? Well it’s not proven, but absence of evidence is not evidence of absence,” says William Hanage, PhD, an associate professor of epidemiology at Harvard T.H. Chan School of Public Health. “It can be possible on some occasions, and yet the majority of transmission can be short-range and droplet — which the majority of studies suggest it is.”

Among the indirect evidence for aerosol transmission: Several “superspreader” events, in which one person has infected dozens or hundreds of others, at a choir practice, at nightclubs, and on cruise ships. Adding to the consensus conclusion is the overall speed and pervasiveness of the coronavirus spread.

The WHO has since formally acknowledged that aerosol transmission, particularly among those who are indoors for long periods of time, “cannot be ruled out.”

Meanwhile, some scientists are concerned that calling the coronavirus “airborne” will instill unnecessary fear, especially given how quickly it disperses outside. Measles is decidedly and very dangerously airborne, for example, but other viruses don’t survive at all outside the body.

“When we talk about aerosols, especially with Covid-19, it’s really about closer interaction within an enclosed space,” says Saskia Popescu, PhD, an epidemiologist and adjunct professor of public health at the University of Arizona. “We know that primarily, transmission is through droplet transmission,” Popescu tells Elemental. “Aerosols can be generated, but we shouldn’t take this as ‘it’s airborne!’ — rather a layer of transmission to consider.”

Even with a mask and several feet of separation, you wouldn’t want to be just downwind from a group of people who are singing or shouting.

What experts are willing to do outdoors

So her kids are now spending time at a local community pool, where they swim in lanes only with other family members, and Hula-Hoops mark off each child’s space on the pool deck.

“What I’m willing to do both personally and to advise people professionally is really contingent on what [the metrics] look like in our community,” she says in a phone interview. “It all goes back to your local situation.”

She would not, for example, take her family to a crowded beach in California or Florida, where new cases are surging, and where she’d have less control over the behavior of others.

Marc Lipsitch, PhD, a professor of epidemiology and director of the Center for Communicable Disease Dynamics at Harvard T.H. Chan School of Public Health, knows as much as anyone about this pandemic. I asked him if, given all he understands, he’d go to an outdoor restaurant during the pandemic.

“I have, actually, once,” he said. It was with family and one friend, who he describes as almost family. “I don’t think that’s a riskless activity,” Lipsitch says. “But the wait staff was masked, and we were masked when we weren’t eating.” Importantly, he notes, this was in a part of Massachusetts where he knew there were very few cases.

“That seems completely reasonable to me,” he says. “If I were in Houston, Texas, I might not.”