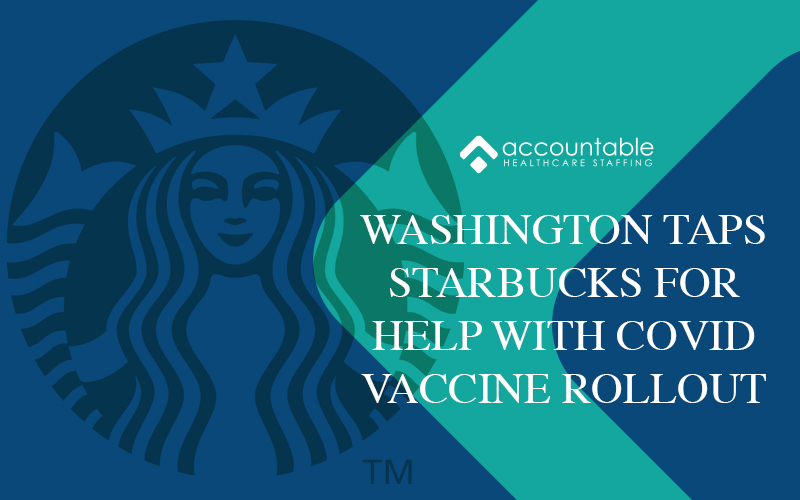 Aiming to boost the slow pace of administering Covid-19 vaccinations, Washington Gov. Jay Inslee said Monday that the state has turned to Starbucks for help streamlining logistics and setting a new goal to dole out 45,000 doses a day.

Starbucks has assigned 11 employees with expertise in labor and deployment, operations, and research and development to work full time on vaccine distribution in its home state, the company said, adding that the number of employees could change.

Inslee said the state is also arranging for over 2,000 pharmacies to administer vaccinations and setting up drive-by vaccination sites. Microsoft, another Seattle area-based corporation, will also set up a site to perform 5,000 vaccinations a day, he said.

“This is a unique challenge for the United States and in every state to stand up a total mobilization of our resources,” Inslee said. “We did that in World War II when we built the Liberty ships here in Washington state. We reached production levels that no one could imagine because we set ambitious goals.”

The two vaccines approved for use in the United States, which require two shots, are remarkably effective, but the rollout nationwide has been slow since they started going out one month ago. Nationwide, 12.2 million people have received one dose of one of the vaccines, according to data from the Centers for Disease Control and Prevention, and just 1.6 million have received both doses, among a total population of 330.8 million Americans. The Trump administration had promised to vaccinate 20 million Americans by the end of 2020.

“We can’t think that’s an acceptable pace,” Starbucks CEO Kevin Johnson said. “So we have to dramatically scale this up and accelerate the progress.”

Inslee, a Democrat, said that the state underestimated how difficult it would be to vaccinate all health care workers quickly before moving on to other populations and that fewer people signed up for vaccinations than it expected.

“We’re having the same challenges that every state has had, because we started on the more difficult part of this — which is a fairly select small group, which is health care workers,” he said. “And in order to identify them and vector them into the sites — that has been a slower part of the process. Now we will start today to open up this to people of age over 65. It is much easier to communicate and coordinate that group to get them in.”

Starbucks started discussions with the state earlier this month. Just 31,581 people have received both doses in Washington, which has a population of 7.6 million, according to CDC data. This week, the state began allowing people over age 65 to get vaccinated.

President-elect Joe Biden said last week that he would deploy the Federal Emergency Management Agency and the National Guard to help set up vaccination clinics across the country to meet a goal of administering 100 million shots in the first 100 days of his term.

Several states have started working with large pharmacy chains to expand distribution of vaccines to health care workers. West Virginia has vaccinated more residents per capita than any other state by working with small, independent pharmacies instead of the big chains.

Several Democratic governors, including Inslee, said last week that the Trump administration had misled them about whether a national stockpile of vaccines was being held for second doses. Inslee said the federal government told governors that there was a strategic reserve.

Inslee said he has plenty of trust that the Biden administration will do a better job distributing vaccines to the states.

“I’m confident we’re going to have a much better relationship, that the federal government is not going to consciously deceive us like the last administration did,” he said. “And so I feel very good about our federal partnership moving forward.”

CORRECTION (Jan.19, 2021, 6 p.m. ET): A previous version of this article misstated where Microsoft Corp. is headquartered. It is based in Redmond, Washington, not Seattle.