Safe, Fireworks-Free Ways to Celebrate the Fourth of July at Home 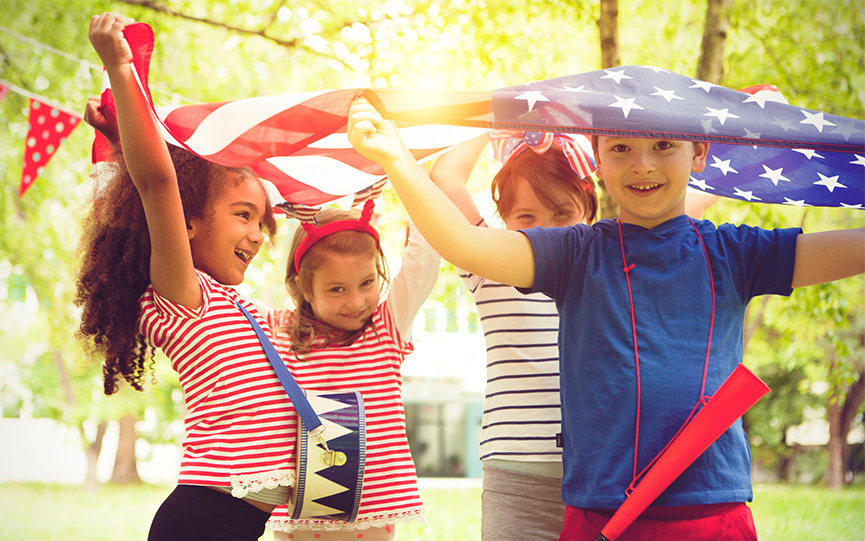 Not a Fireworks Fan?

Fireworks on the Fourth of July are an American tradition, but not everyone loves them. Though large public displays of fireworks are largely canceled this year because of the pandemic, that’s likely fine with young kids or people with sensory disorders. Chances are good your pets don’t love them, either. Backyard displays seem like fun, but can be dangerous and aren’t always legal, depending on your location. Here are non-firework options that are just as exciting and fun for celebrating the Fourth of July.

Collect a few large cardboard boxes and provide a few red, white, and blue craft supplies. Party planner Sara Pattison recommends having each child create their own patriotic drive-in movie seat out of the boxes. Show a patriotic, family-friendly movie projected on a white hanging sheet as the screen and serve festive snacks like a red, white, and blue punch and Pop Rocks for candy. A popcorn bar that includes red, white, and blue M&Ms or Nerds to decorate their popcorn is sure to score with kids.

Set up a Glow-in-the-Dark Activity Table

Consider lighting up the night without all of the noise and safety concerns. “Glow-in-the-dark is the best for Fourth of July, as parties can go into the evenings and this really lets kids experience the night in a new safe way,” says Sara Pattison, owner of The Perfect Party Planner. “Set up a glow-in-the-dark kid’s table!” Glow sticks, glow-in-the-dark sunglasses, bracelets, necklaces, even these glow-in-the-dark helicopter launchers on Amazon for $25, will offer hours of illuminating fun for little ones — and even adults. Anything goes here and you can find it for cheap on Amazon.

There are plenty of fun scavenger hunt ideas that can be played by the whole family. We like the idea of making it Fourth of July-themed to get everyone in the holiday mood. Things to include in your scavenger hunt: something red, something white, and something blue. Other Americana favorites can include hotdogs, hamburgers, the American flag, and a baseball (the all American sport).

Most parades have been canceled around the U.S. due to the pandemic, but that doesn’t mean you can’t have fun. Dress up the kids and anyone else in your family in red, white, and blue and march down the sidewalk, and maybe other families can join in (at a safe distance, of course). And if anyone can play an instrument like a recorder or flute, even better.

No special occasion would be complete without slime. It’s all the rage among the younger set, so why not turn it into a Fourth of July activity? You can find DIY slime recipes online like the one from The Farm Girl Gabs that have a patriotic theme. Decorate the slime with red-and-white glitter as well as red-and-blue star confetti. Store it in zip lock bags or disposable condiment containers. This is the perfect sensory activity to keep the kids occupied for hours.

Let the kids (or grown-ups) dress the pets in patriotic duds. You can even provide some things to get them started such as red-and-blue bandanas (a pack of 12 can be found on Amazon for $23), balloons, and streamers. Invite some onlookers (neighbors and friends), to watch the parade from their front yards.

Party planner Sara Pattison also recommends glow-in-the-dark bowling as a family favorite. “Take six empty tall plastic bottles and add glow sticks for the pins,” she says. “You could use any ball, but a hamster ball would be fun. Just add glow sticks.”

Make getting dressed up it a friendly affair. Gather the neighbors, and have the kids create their own patriotic costumes. Then, have them march out and let the grown-ups be the judges. Award everyone a small prize to make it even more exciting.

Take the costume contest idea one step further and have each kiddo decorate their bike. Provide red, white, and blue materials like streamers, balloons, flags, and glitter. Let the kids have at it and see what they come up with, then parade them around for the neighborhood to see.

Another glow in the dark idea: glow-in-the-dark water balloons. It’s easy to do yourself according to party planner Sara Pattison. Just fill a water balloon with water and add a glow stick. You can even let the kids help by having them crack all the sticks while you add a stick to each water balloon.

If water balloons aren’t your cup of tea, how about fun confetti balloons for a little pop instead of a bang on the Fourth of July? All you need are balloons, confetti, a funnel, and an air pump. Find the directions to make these fun and festive balloons that will be sure to please a crowd at Moore Minutes.

Instead of sharing a blanket and snacks under the night sky while waiting for fireworks, do an afternoon or early evening picnic to commemorate the day. Pack up some of your holiday favorite foods, a frisbee or whiffle ball set, and be prepared to enjoy some family-friendly time outside.