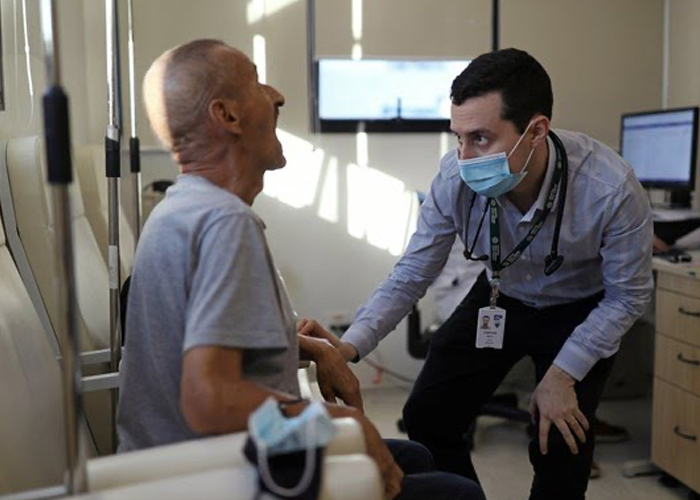 A coronavirus vaccine being developed by the University of Oxford and AstraZeneca is safe and shows signs of inducing an immune response, according to early clinical trial results published in The Lancet medical journal.

The trial did not look at whether the vaccine prevents coronavirus infection, however. That’s a question that will be answered in trials that are ongoing.

The trial results found that the vaccine generated two “strong” immune responses: the production of both antibodies and T cells. The immune system makes antibodies in response to a virus so it can recognize it and fight it off a second time. T cells are also important, because they search for infected cells, attacking and killing them.

“We’re getting both sides of the immune system stimulated, and that is fairly unusual for vaccines,” Adrian Hill, director of the Jenner Institute at Oxford University, told NBC News.

It is “good news — another step forward on the long road” to having a COVID-19 vaccine, Dr. William Schaffner, an infectious disease expert at the Vanderbilt University Medical Center in Nashville, said. He was not involved in the vaccine research.

The World Health Organization echoed similar cautious optimism. “This is a positive result,” Dr. Mike Ryan, executive director of the WHO’s health emergencies program, said during a news conference Monday, adding, “there is a long way to go. These are phase 1 studies. We now need to move into larger-scale, real-world trials.”

The Oxford trial included 1,077 participants, all adults ages 18 to 55. Ten participants also received a booster shot 28 days after the initial shot. Fatigue and headache were the most common side effects reported among all of the participants.

A T cell response was noted within 14 days of receiving the first dose of the vaccine. Antibody levels peaked around 28 days after the first shot, and lasted for at least 56 days. It’s unclear how long that immunity will last.

The clinical trial did not establish whether the vaccine protects against coronavirus infection. That will be determined in the phase 3 trials, which are taking place in Brazil, South Africa and the United Kingdom. Trials will also be started in other parts of the world, including the United States.

“We want to look at the efficacy of the vaccine in different populations,” Hill said.

The vaccine is made from a weakened form of a common cold virus, called an adenovirus, that’s been genetically modified to carry instructions for cells to make the coronavirus’s notorious spike protein. The idea is that, if the vaccine can instruct human cells to make this protein, the human system can learn to recognize it and better protect against infection.

Experts say this ‘bridge to a vaccine’ may be a reason for optimism. Here’s how it works.

Early research found that the experimental vaccine induced antibody production in six rhesus macaques. These monkeys are considered to be good proxies for how drugs could work in people because they share a majority of their genes with humans. When the researchers exposed the vaccinated animals to the coronavirus, they did not develop pneumonia or other lung problems.

The global race toward a vaccine for COVID-19 — which had sickened nearly 15 million people worldwide — is, indeed, moving far more quickly than work on previous vaccines.

And there is unlikely to be a single “winner.” Multiple vaccines will be necessary to cover the entire world.

Indeed, dozens of teams across the world are working on potential coronavirus vaccines. At least 140 are in development, and nearly two dozen have reached human trials.

Moderna, a Cambridge, Massachusetts-based biotech company, published the phase 1 trial results of its vaccine last week, and announced plans to begin its final phase of human testing at the end of July. In the phase 1 trial, researchers reported that all 45 volunteers developed antibodies key to fighting the coronavirus.

Like the Oxford vaccine, both the Moderna and the Pfizer COVID-19 vaccines in development also suggested T cell responses. Moderna’s T cell response appears to have been weaker, though it exhibited a strong antibody response. The Pfizer study was posted Monday to a preprint server and has not been published in a peer-reviewed journal.

Researchers “are working very rapidly. We’re saving time, because we’re doing some things simultaneously, that we used to do in sequence,” Schaffner said. “No corners are being cut.”

Asked whether a finished Oxford vaccine was likely in the next year, Hill said the research was still targeting 2020.

“A vaccine later this year is not impossible. A lot of things would have to go right for that to happen and to be deployed in 2020, but we’re still targeting that.”