Nurses Ranked Most Trusted Profession 19 Years in a Row 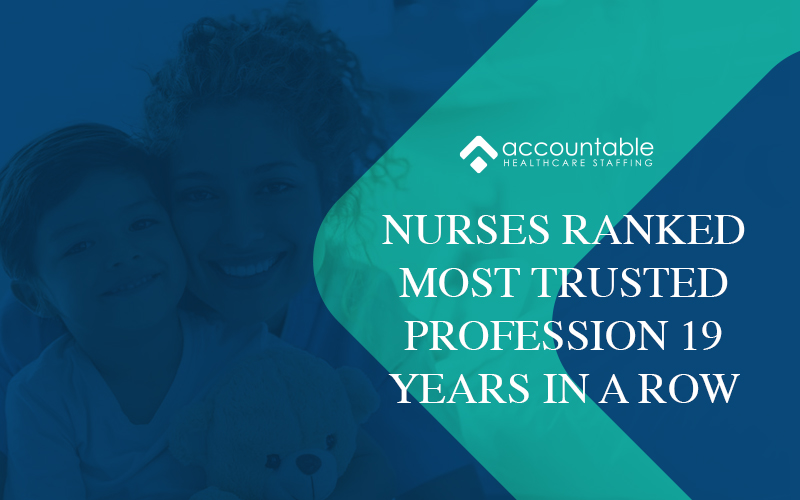 In an impressive 19 year running streak, Americans have rated nurses as the #1 most ethical and honest profession, according to the most recent Gallup poll.

The 2020 poll revealed that 89% of Americans rated nurses’ honesty and ethical standards as “high” or “very high,” coming in even higher than last year’s record setting number. The honor is an impressive one, as the poll included other medical professionals, including physicians and pharmacists. Consistently, healthcare professionals are at the top of the list. Interestingly, this year’s poll saw grade school teachers jumping to the third on the list with a 75% rating.

According to Gallup, nurses have been the number one ranking profession since the inception of the list in 1999 with the exception of one year. Following September 11th, firefighters ranked number one earning the highest score to date for any profession, 90%

Medical professionals, in general, are viewed as the most ethical and honest of all professions. This is in direct contrast to those professions Americans see as the least ethical and honest, such as Congress members and car salespeople both tying for last place with 8% of the vote. This number is down from 2019’s 9% rating. 2020 marked a year of a lot of change for Americans due to the ongoing pandemic but also increased the public’s perception of those working on the front line such as nurses, teachers, and police officers. Despite nurses constantly being number one in the Gallup ranking, the numbers continue to rise as nurses dominate.

The poll saw no significant difference in those respondents age, race, gender, and political affiliation in terms of the response regarding nurses. Nurses across the board were regarded with very high or high honesty and ethical standards.

As in the years past, the survey was conducted through telephone interviews that included both cellphone and landline respondents in a random sample of adults in the U.S.

The Year of Change

As a result of 2019’s Gallup poll, 2020 was celebrated by The American Nurses Association (ANA) as the “Year of the Nurse,” designated by the World Health Organization (WHO) in honor of the 200th birth anniversary of Florence Nightingale’s birth.

Unfortunately, 2020 saw less celebration of nursing and more demand. The ongoing fight against COVID-19 has led many to struggle with burnout, mental health issues, and questioning whether they were truly making a difference in the profession.

Gallup’s poll comes at a time when many nurses continue to battle everyday to keep their patients, families, and even themselves safe. This poll is reassurance that the country needs nurses, respects nurses, and loves nurses now more than ever.

“I am extremely proud of my fellow nurses,” said ANA President Ernest Grant, PHD, RN, FAAN. “Nurses have been tested in every way imaginable during 2020. The world watched as nurses lost numerous patients and colleagues to a highly communicable, deadly virus while trying to protect and preserve their communities with limited resources and support. Nevertheless, through it all, nurses have consistently proven they are resilient, selfless, and compassionate, risking their health and safety for the common good. Therefore, nurses are undoubtedly deserving of the public’s unwavering trust,” said Grant.

“As we congratulate nurses, we must remember their tremendous sacrifices as they continue to serve on the frontlines of this pandemic, which has taken a heavy toll. ANA’s top priority will remain ensuring that the nursing workforce is prepared, protected, and supported. For doing so is vital in the nation’s ability to effectively respond to this virus, so we can all successfully recover better, faster, and stronger,” says Grant.

The ANA has set up free to low cost therapy options for all nurse members as a result of the past year.

Here’s to 19 years in a row and the Year of the Nurse–which, in our opinion, should definitely be every year. Nurse.org applauds all of the nurses who continue to fight to change the lives of their patients and their families especially amongst the ongoing pandemic, the nursing students who are entering a profession that continues to advocate, and those who rated nurses as the most trusted and ethical profession again.