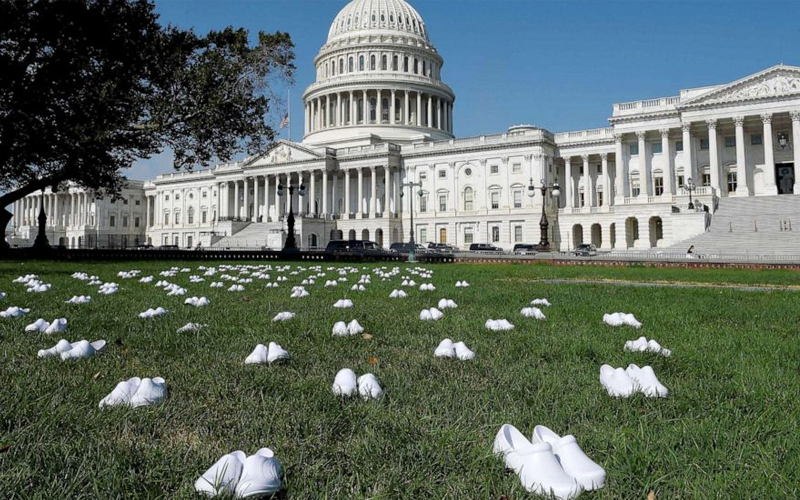 Two months ago, there were 88 pairs of shoes placed in front of the White House to represent the number of nurses who had died in the fight against the novel coronavirus, said National Nurses United union’s Stephanie Simms. On Tuesday, 164 pairs of nurses’ shoes were placed on the lawn of the U.S. Capitol.

“There are no words that can fully express the anger and the sadness I feel this morning,” said Simms.

“Mothers, fathers, brothers and sisters, sons and daughters. All gone,” she continued.

After laying out the shoes, members of the National Nurses United read the names of the 164 nurses who have died due to coronavirus.

They illustrated the grim statistic on Tuesday as they urged Congress to step up “in the absence of presidential leadership,” to enact workplace protections for hospital employees, and provide more PPE for medical workers. Simms said that the House acted by passing the Heroes Act, and she urged the Senate to approve that measure.

“On May 15th we thanked the House for acting and called on the Senate to swiftly pass the Heroes Act into law, but Senate Majority Leader Mitch McConnell instead did nothing. He called a recess and went on vacation. So nurses continue to die,” said Simms.

The House passed the Heroes Act, a $3 trillion coronavirus relief package on May 15. The proposed legislation includes a second round of direct cash payments to Americans, $1 trillion in aid for local, state and tribal governments drowning under the strain of the novel coronavirus, assistance for essential front-line workers, an extension of unemployment benefits and various other Democratic measures.

McConnell is poised to introduce his bill this week as he prepares to sit down with Democrats to negotiate the next stimulus package.

“Senator Mitch McConnell can use his immense power to do the right thing and shepherd the passage of the Heroes Act. The question is, will he act to save lives or will he continue to turn a deaf ear to the pain and suffering of the American people. Including the nation’s nurses?”