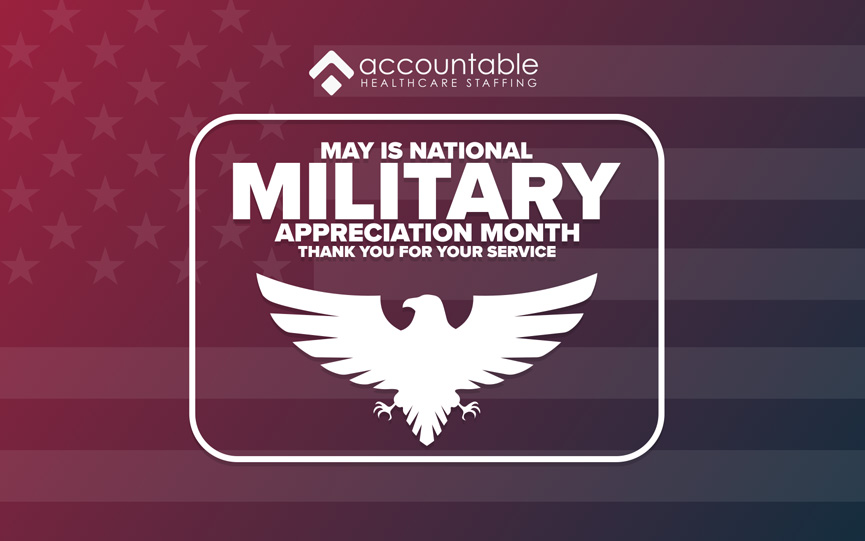 National Military Appreciation Month (NMAM) is celebrated every May and is a declaration that encourages U.S. citizens to observe the month in a symbol of unity. NMAM honors current and former members of the U.S. Armed Forces, including those who have died in the pursuit of freedom. May is characterized by six national observances highlighting the contributions of those who have served. Show your support on social media with #MilitaryAppreciationMonth.

Loyalty Day
Date: Sunday, May 1, 2022
About: Loyalty Day kicks off our Nation’s month-long celebration of military appreciation. It is a day set aside for the reaffirmation of loyalty to the United States, and to reflect on the proud heritage of our American freedom.

Public Service Recognition Week (PSRW)
Date: Sunday, May 1 – Saturday, May 7, 2022. Celebrated the first full week in May.
About: A time set aside to honor the men and women who serve our nation as federal, state, county and local government employees and ensure that our government is the best in the world.

Victory in Europe Day AKA V-E Day or VE Day
Date: Sunday, May 8th, 2022
About: May 8th, 1945 is the day when Germans throughout Europe unconditionally surrendered to the Allies. This day marked the end of World War II in Europe.

Military Spouse Appreciation Day
Date: Friday, May 6th, 2022. Traditionally set for the Friday before Mother’s Day.
About: A day to honor military spouses with appropriate ceremonies and activities. Recognizes the important role our military families play in keeping our Armed Forces strong and our country safe.

Armed Forces Day
Date: Saturday, May 21, 2022. Celebrated the third Saturday in May every year.
About: A single holiday for citizens to come together and thank our military members for their patriotic service in support of our country.  This day honors everyone serving in the U.S. Military branches; Air Force, Army, Coast Guard, Marines, Navy, Space Force. There is also Armed Forces Week which typically leads up to Armed Forces Day, although it is not an official observance, many activities are planned nonetheless during the week.

Memorial Day
Date: Monday, May 30, 2022. A Federal holiday observed on the last Monday in May.
About: A remembrance of our veterans.  Commemorates the men and women who died while in military service. All Americans are encouraged to pause, wherever they are, at 3:00 pm local time for a minute of silence.

Month of the Military Caregiver
Date: Month of May
About: Honors more than five million caregivers in the U.S. and pays tribute to the people who care for more than two million veterans.

Silver Star Service Banner Day
Date: Sunday, May 1, 2022
About: Recognizes those who have been awarded The Silver Star Medal, and remembers the sacrifices of our wounded and ill veterans.

Giving Tuesday
Date: Tuesday, May 3, 2022
About: In response to the unprecedented need, May 3 will serve as a global day of giving and unity. Here are a few ideas for Giving Tuesday

National Day of Prayer
Date: Thursday, May 5, 2022
About: The day is non-sectarian /non-partisan, meaning that western religions such as Judaism, American Christianity, and other familiar faiths may be represented (by attendance) alongside Wicca, Unitarian Universalism, and non-western traditions such as Buddhism, Islam, and others. No specific belief is intended to be promoted above another.

Children of Fallen Patriots Day
Date: Friday, May 13,  2022
About: Honors and raises awareness of the sacrifices and struggles the children of fall patriots must endure in the wake of their parents death.

NMAM started as a simple idea; to gather America around its military family to honor, remember, recognize and appreciate those who have served and those now serving and to know the history behind it all. May was chosen because it already has many individual days set aside to recognize the U.S. military’s achievements.

In 1999, the late Senator John McCain introduced formal legislation to designate the month of May as National Military Appreciation Month. Both the Senate and House of Representatives adopted resolutions calling for Americans to recognize and honor U.S. Service Members during NMAM. These resolutions also urge the President to issue a proclamation calling on the people of the United States to observe NMAM.

Because most holidays commemorating historical military events have become little more than three-day weekends lacking focus on their original purpose, this month is to remind Americans of the sacrifices and the history we have been privileged to participate in since the nation’s birth. During the month of May, the military is encouraged to support local engagements designed to draw public attention and illustrate public support and appreciation and thanks to the military family.

Ways to Support our Military & Veterans