“I asked myself, are you a nurse or not?” 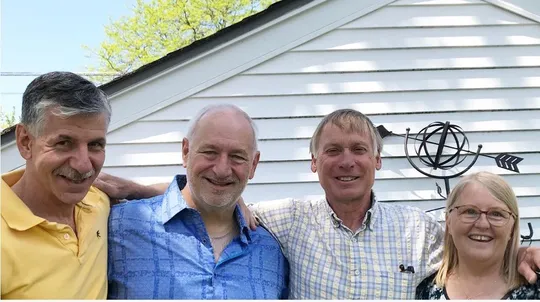 A Brookfield man was in the right place at the right time to save a man’s life earlier this year.

Brian Smallcombe shares his story with Karen Pilarski of the Milwaukee Journal Sentinel.

Smallcombe’s partner, Richard, had been on him to come watch him play pickleball. In March, Smallcombe gave in. After watching and working on homework for about 15 minutes, he noticed a commotion as people were yelling and calling for someone with medical training.

Pickleball player Bob Schmidt of Wauwatosa had collapsed. His face was turning blue, and there was a pool of blood where he split open the back of his head. Smallcombe and Jim Hotson of the Milwaukee Recreation Department sprang into action.

While Hotson ran to find the automated external defibrillator, Smallcombe pounded on Schmidt’s sternum, then ripped open his shirt and started chest compressions.

It was an emotional scene, especially for Mary Ellen Boehme, Bob’s wife of 39 years. She and Hotson kept talking to Schmidt, encouraging him to stay with them.

“I thought this could be it; he wasn’t coming back,” Boehme said.

Smallcombe put the AED into service, shocking Schmidt twice in an attempt to get his heart back into a normal rhythm. After the second shock, Schmidt’s face started to regain its normal hue.

When emergency medical crews arrived, Smallcombe was nudged out of the way.

“The EMT asked who worked on him, as they never see a person this good (of condition) when they get there,” Smallcombe said.

Schmidt was transferred to the hospital; he was in the ICU for five days.

The scary incident in March was not the first time Smallcombe helped save a life. About three years ago, he was driving to church to Wauwatosa when he saw what looked like two guys wrestling in the grass.

“I knew something wasn’t right and pulled over,” he said.

One of the men said his brother was overdosing on heroin. Smallcombe counted while the man did compressions. Police administered Narcan, which counteracted the overdose and helped the man regain consciousness.

Smallcombe described his reaction in both incidents as “going into response mode.”

When Schmidt fell, “I asked myself, are you a nurse or not?” he said. The Herzing University student is scheduled to graduate with a bachelor’s degree in nursing in December.

Both experiences with CPR cemented his future in the nursing field.

It was fate that got him into the field in the first place later in life. After being laid off from his job at about 49, he was offered a chance to pursue his education. Smallcombe thought about the increasing shortage of nurses and felt this was a career with job security. It also offered an amazing opportunity to help people, he said.

Smallcombe was already involved in philanthropic causes such as the Great Lakes Hemophilia Foundation and Project ADAM, an organization that makes sure schools are heart safe.

Schmidt and Boehme were so appreciative they donated to Project ADAM in both Smallcombe and Hotson’s names. Milwaukee Mayor Tom Barrett proclaimed May 3 (Smallcombe’s birthday) as Brian Smallcombe Day in the city of Milwaukee.

What’s next for the Herzing student? Smallcombe has his priorities in line; he said he just wants to graduate and obtain his RN license.

Schmidt suffered no lasting physical damage from his March scare. He said he doesn’t recall anything but waking up in the hospital. He was able to return to playing pickleball in June, and said he feels great.

It turns out his sudden cardiac arrest was caused by a childhood infection that weakened the left ventricle in his heart. Because he is fit and active, it never slowed him down.

After the incident in March, Schmidt had a defibrillator surgically implanted in his chest.

He and his wife learned about Project ADAM through Smallcombe.

The project was developed at Whitefish Bay High School, where their daughter teaches. A 17-year-old athlete, Adam Lemel, suffered a sudden cardiac arrest. By the time an AED reached the student, it was too late.

From that tragedy came Project ADAM. The nonprofit organization helps schools and communities get the equipment and training necessary to prevent sudden cardiac deaths.

The Wauwatosa couple and Smallcombe recommend people learn CPR and help increase the availability of AEDs.

The recovery rate is low for people who experience cardiac arrest, Smallcombe said. He has a friend who has been a firefighter in Milwaukee for 19 years. Out of the hundreds of people the friend has performed CPR on, he saved only five people.

Smallcombe said for rescue officials, you have to consider travel times. When Schmidt collapsed, he was right there.

“Had we waited, Bob would have died,” he said.

Boehme is very thankful Smallcombe was there in March.

“All the stars were aligned,” Boehme said.