How a Nursing Shortage Affects Families With Disabled Children 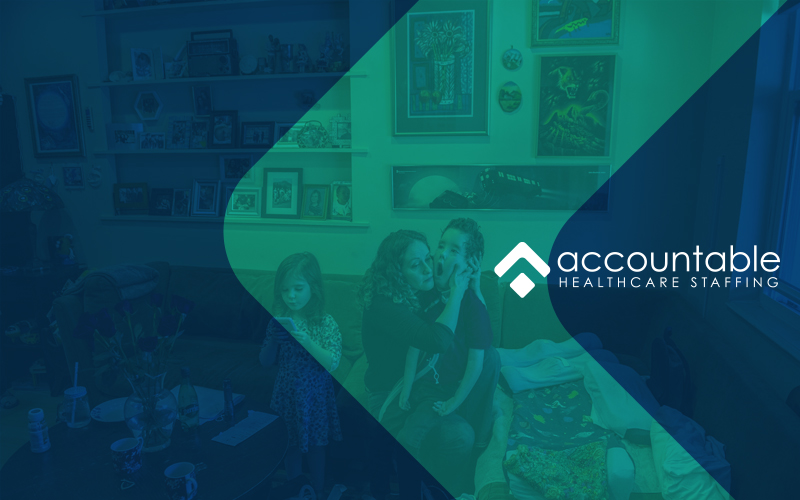 To Keep Their Son Alive, They Sleep in Shifts. And Hope a Nurse Shows Up.

A nursing shortage — driven by the pandemic — has made life miserable for parents with profoundly disabled children. “What if I’m so exhausted that I make a mistake?”

It was 9 a.m. on a Sunday in May, and Chloe Mead was already worn out.

In her living room, she cradled her 7-year-old son, Henry, supporting his head with one hand and helping him toss a ball with the other, careful not to disturb the ventilator that was keeping him alive. A nearby monitor tracked his blood-oxygen levels and a pump was at the ready should his tracheotomy tube need cleaning. In the corner, her 4-year-old daughter was building a pillow fort.

Ordinarily, she wouldn’t be by herself. Since infancy, Henry, who has spinal muscular atrophy, a rare muscle-wasting disorder, has had intensive, round-the-clock nursing at home, with Ms. Mead and her husband serving as fallbacks when a nurse unexpectedly cancels a shift.

But the recent shortage of home-care nurses has forced the couple, who live in Queens, to handle longer and longer periods on their own — as many as 36 hours at a stretch. That morning, her husband, Andy Maskin, was catching up on sleep so he could take that night’s late shift, from 2 a.m. until 7 a.m., when he begins his own workweek.

About 4.5 million Americans with illnesses and disabilities are cared for at home by aides, therapists or nurses. Most of these patients are older, but hundreds of thousands are children with complex health needs, a number that has climbed upward as medical advances allow more to survive into adulthood.

The families of these children have long struggled to find skilled help, but many say Covid-19 has made an already untenable situation even worse. Nurses left the work force to care for their own out-of-school children, or abandoned the profession permanently. And the surging demand for personnel at hospitals, testing sites and vaccination centers drew nurses away with as much as double the wages they earn caring for patients at home.

The easing of the pandemic may not improve conditions much. The shortage of nurses is longstanding and in the wake of a public health crisis that prompted 29 percent of health care workers to consider leaving the profession, many expect a wave of retirements.

“This is as bad as it’s ever been,” said Liz Wise, who works for the nationwide nonprofit Bayada Home Health Care, helping transition young patients from hospitals to homes. Her own daughter needed home-care nursing, so she feels it keenly when patients can’t get the coverage they need. “Disappointing families is enough to keep me up at night.”

Many had pinned their hopes on the Biden administration’s infrastructure plan, which would provide $400 billion to improve home and community-based care. But as the president and Republicans vie over the proposal’s size and scope, it’s unclear whether that part will survive.

The Pandemic Deepens a Pay Gap

A nurse caring for a medically fragile child at home has the same responsibilities he or she would in a hospital but no medical backup in case of emergency. It’s a high-wire act, and experts say that prevailing wages don’t reflect its difficulty.

Federal guidelines permit state Medicaid programs to cover in-home care for eligible children regardless of their families’ income, since the price of round-the-clock nursing would bankrupt almost anyone. But states generally pay home care nurses at much lower rates than they would for equivalent care in a hospital or other medical center.

“They effectively establish a benchmark of workers’ compensation that competitively disadvantages this field,” said Roger Noyes, a spokesman for the Home Care Association of New York State. In turn, state-certified home health agencies that provide families with nurses pay meager salaries and seldom offer health insurance or other benefits to the nurses they employ.

So, although home care is more appropriate for medically fragile children, hospitals receive about half of Medicaid spending on these cases compared with 2 percent for home care, studies show.

And Covid-19 generated competing demands for nursing that further diminished the home care work force. Surging with the pandemic, the state’s largest health care provider, Northwell Health, hired 40 percent more nurses in 2020 than the year prior and contracted with 1,000 additional temporary nurses once the local hiring pool was exhausted.

“As recently as two years ago, we could easily interview 20 people a week who were qualified — now we’re lucky to get two to four,” he said. For the first time in his career, Mr. Pacella said, he had to turn new patients away.

Jarred Rhatigan, a 31-year-old nurse from Nassau County, was once part of the home care work force: In addition to a full-time position in a hospital, he worked several days a week with Caring Hands for an hourly wage of around $40. But beginning last December, he dropped all those shifts to administer vaccines at sites across the greater New York area for up to $75 an hour.

“Home care definitely can’t compete with the rates,” he said. These earnings helped him pay off $8,000 of student loans this year, although it’s just a dent in the $62,000 he still owes.

For the last four years, Jen Semple, a registered nurse in South Carolina, has provided home care to a single patient, despite hourly pay that rose just $1 during all that time. When the pandemic began, she cut her home care hours to administer vaccines for a local health care system, at an hourly wage $7 higher than she had been earning. It is rewarding to contribute to the Covid recovery, she said, and the atmosphere is cheerful, with a stream of patients thrilled to get their doses. “But part of me does feel guilty because I know my private duty patient still has hours unfilled,” she said.

Between June and October 2020, Carolyn Foster, a researcher and pediatrician at the Ann and Robert H. Lurie Children’s Hospital of Chicago, surveyed parents of medically fragile children and found that half had lost home health care services during the pandemic. And patients with the most complex conditions often have the hardest time finding capable staff.

“The most vulnerable families were made all that more vulnerable,” she said.

In the first months of the pandemic, two of Henry’s nurses fell ill and quarantined, and his parents cut back hours at their own jobs to take up the slack. After several months, they reassembled their nursing coverage, but by this spring, gaps reappeared. Ms. Mead said that when she called her home care agency, they responded, “We have nobody.”

Ms. Mead reached out to other agencies, contacted nurses who had formerly cared for Henry, and posted a plea on Facebook. To make matters worse, her daughter had recently been diagnosed with Type 1 diabetes, so the couple now had to look after two children with life-threatening conditions.

The recurrent all-nighters have stretched both parents thin. “I would like to believe that I’m always going to be 100 percent sharp, but what if I’m so exhausted that I make a mistake with something?” Ms. Mead asked. “It’s really frightening.”

For single parents, the difficulties are compounded. Sarin Morris, a 40-year-old mother in Clifton, N.J., has sole responsibility for her 4-year-old, Sam, whose rare neurological disorder has left him on a ventilator and prone to seizures. He is prescribed 20 hours a day of nursing care but has never had nurses to cover it all.

Ms. Morris and Sam’s father divorced before he was born and her parents live in Italy, so she has no family to assist her. If she can get a nurse, she works at Home Depot. Early in the pandemic she switched to the night shift, restocking shelves while the store is empty to reduce the risk she will contract the coronavirus and pass it on to her son. “But if I don’t have coverage, I can’t go to work,” she said. “And if I can’t go to work, I can’t have my bills paid on time.”

Weekends are the worst, she says. She has struggled to get any nursing coverage at all, and from Saturday night to Monday morning she is alone with her son, sometimes lying in bed beside him so his seizures will wake her if she dozes off. When a nurse finally relieves her, she rests a few hours before heading to work. “It’s a nightmare,” she said. “I don’t remember the last time I got a full night’s sleep in my bed.”

Out of desperation, Ms. Morris has considered enrolling in nursing school, in hopes of earning a living at her son’s bedside. State Medicaid programs typically bar people from getting paid as caregivers for relatives, but some of those restrictions were temporarily relaxed during the pandemic, and a few states have established permanent programs. In Colorado, for example, people can become paid certified nursing assistants for family members. But Ms. Morris is daunted by the tuition for the two-year nursing program at a nearby university, over $25,000. Her current job pays $13 an hour, and she has no savings.

To address the deficit of nurses, experts tick off recommendations including better incorporating home care into nursing education and creating financial incentives to enter the field — but most agree the problem can’t be truly addressed without narrowing the disparate pay between home care and medical facilities.

“Reimbursement rates need to be increased for home care, and also include health benefit packages, so that it becomes more of a valued health care role,” said Cara Coleman, the director of public policy and advocacy at Family Voices, a nonprofit that advocates for families and children with special needs.

Until recently, New York State’s Medicaid program paid less than most other states for registered nurses who care for medically fragile children. Last October, after years of advocacy by families and medical providers, the state carried out the first of several planned increases in reimbursement, and by April 2022 they will have risen by 45 percent.

“We were blown away they did it,” said Dr. Eddie Simpser, the president of St. Mary’s Healthcare System for Children, who pushed for the increase. But, he said, “hospital salaries are still strong competition.”

Since Medicaid programs receive significant federal funding, many advocates are looking to Washington for help. As part of the stimulus package, enacted in March, the Biden administration temporarily increased federal support for state Medicaid programs’ home and community-based services — but the measure lasts only one year, and states may balk at expanding programs that they will ultimately have to fund themselves. Biden’s infrastructure plan would go even further, sending states $400 billion over 10 years to beef up home care.

Dr. Foster, the researcher and pediatrician, said that this would be “a critically needed increase” in resources but that it isn’t a long-term solution. She pointed instead to a proposal by a group of Democratic lawmakers to permanently expand the entitlement for home and community-based services and standardize it nationwide, with the costs borne entirely by the federal government. Calling it “a once-in-a-generation opportunity,” she conceded it would carry a high price tag.

As the pandemic ebbs and testing and vaccination sites slow down, some nurses are expected to return to home care. But Ms. Mead has seen no sign of it: She lacks nursing coverage two nights this coming week, and expects to pass them, vigilant, caring for her son.