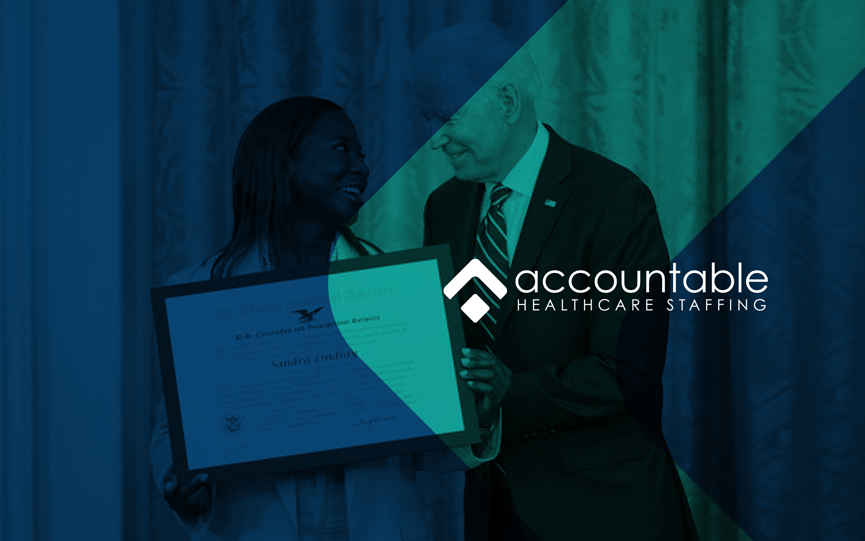 Sandra Lindsay immigrated to the U.S. from Jamaica when she was 18 years old. Now, she’s going down in history for her role in the fight against COVID-19.

President Biden announced on Friday that Lindsay, who was the first person in the nation to receive a COVID-19 vaccine after the FDA authorized its use in December, will have her hospital scrubs, vaccination card and the badge she wore on the day she received her first dose displayed at the COVID-19 exhibit in the Smithsonian Museum of American History.

She was also awarded the “Outstanding American by Choice” award from U.S. Citizenship and Immigration Services, which recognizes naturalized citizens who have made “significant contributions to our country,” Mr. Biden said, adding that she “represented the very best of us all.”

“Over the past, and I don’t believe this, 30 years — she doesn’t look 30 years old — she’s pursued her dream of becoming a nurse to allow her to do what she wanted to do most, give back to her new country,” Mr. Biden said on Friday. “If there are any angels in heaven … having spent a lot of time in the ICU, they’re all nurses — male and female. Doctors let you live. Nurses make you want to live.”

Lindsay was vaccinated on December 14. Shortly after her first dose, she said she felt “hopeful” and “relieved.”

“I feel like healing is coming,” she said. “I hope this marks the beginning to the end of a very painful time in our history.”

Lindsay, who is the director of nursing for critical care at a hospital on Long Island, has been devoted to her co-workers, patients and family over the past year, Mr. Biden noted, but not without cost.

“During the height of the pandemic, she poured her heart and soul into her work to help patients fight for their lives and to keep her fellow nurses safe,” Mr. Biden said. “With a grandson at home — prematurely — she did what she had to do. She kept her distance and kept him safe. He is safe, but she lost an aunt and an uncle to the virus.”

He added that she also became the first person in America to become fully vaccinated outside of clinical trials. “She can now hug her grandson,” he said. “She’s out there making sure her patients and folks in her community are getting vaccinated so they can get back to their lives and their loved ones.”

More than 33.7 million people in the U.S. have been diagnosed with COVID-19 since the pandemic began more than a year ago, and more than 605,000 people have died, according to Johns Hopkins University.

As of Friday, more than 327 million vaccine doses have been administered, according to Johns Hopkins, but just 17 states have fully vaccinated more than half of their population. Many health officials are concerned that the Delta variant, which is known to be more contagious, could devastate vulnerable populations that are not vaccinated.