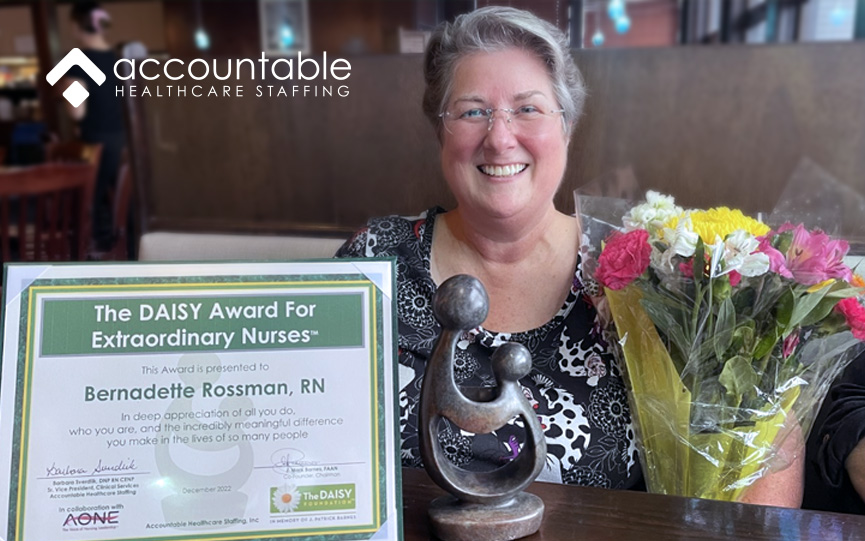 Accountable Healthcare Staffing has partnered with the DAISY Foundation™ to recognize clinicians for the extraordinary skillful, compassionate care they provide patients and families. The DAISY Award is an international recognition program that honors and celebrates the skillful, compassionate care nurses provide every day. We are proud to present Bernadette Rossman with the DAISY Award recognizing extraordinary nurses.

Bernadette has been nursing for almost 13 years. Before she started in the nursing field, she was a police officer for 10 years. After working in law enforcement for a decade, she decided to follow in her mother’s footsteps and go to school to become an RN. While in school, Bernadette worked for MSN doing credentialing in the office, where she met and worked with Lisa Fitzmorris who is now the Regional VP of the West and Southwest Region for Accountable Healthcare. Bernadette moved out of Seattle and finished her schooling but kept in contact with Lisa throughout her time away. When she was ready to come back home, she contacted Lisa who was able to originally set Bernadette up with recruiter Richard Parks, who was able to put her on a travel assignment until she found the area she wanted to commit to long-term.

Bernadette is not just a great nurse; she is an amazing human being. She is extremely caring and humble, she leads with compassion and understanding. Bernadette values the staff she works with and the patients she takes care of, she uses humor to help comfort and educate her patients on every shift. She brings such a positive and uplifting presence to everyone she encounters. Bernadette is a prime example of what we strive to work toward, and we truly appreciate the impact she has made on everyone.