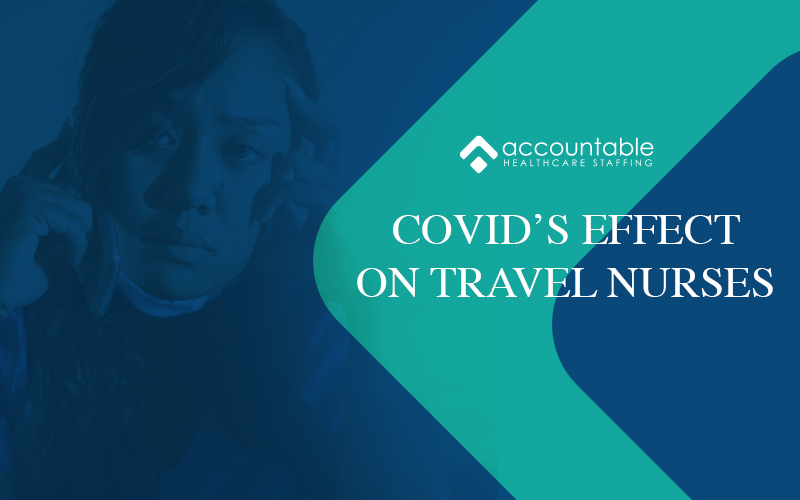 As a travel nurse during the pandemic, you may find yourself feeling burned out, stressed out, depressed, anxious, or a combination of any or all of those things. We want you to know that you are not alone!  Our friends at berxi recently surveyed healthcare workers on the frontline of the pandemic.  Below you will find that data.

The survey was conducted because they wanted to know how COVID-19 has affected healthcare workers’ mental health and well-being. In October, they launched a national survey asking healthcare providers how their mental, emotional, and physical well-being is compared to this time last year. As you can probably imagine, the results were troubling. Here are some of the key findings their survey revealed.

According to their survey, 84% of healthcare workers experience burnout, and 30% feel sleep-deprived. Read on to find out what else the data revealed.

The State of Healthcare Workers Mental Health in 2020: Survey Results

Healthcare workers are overwhelmingly burned out.

The survey found that a startling 84% of respondents reported feeling at least mildly burned out from work. This may not be completely surprising, considering that 3 of the top 5 causes of their stress had to do with the current COVID-19 pandemic and being overworked. Here’s a list of the top 10 stressors that respondents identified:

The state of their mental health has significantly deteriorated.

Just about half (48%) of survey respondents reported that their mental health is worse now than it was this time last year. This was particularly true for more than half of the nurse practitioners (54%) and mental health professionals (53%) they surveyed and for half of all occupational therapists and nurses.

On top of that, just about half of the respondents admitted to crying at work at some point over the past year. When they broke it down by profession, they discovered that 67% of nurse practitioners, 52% of nurses, and half of all mental health professionals reported shedding tears in the workplace.

Despite all this, only 12% of all healthcare workers started psychotherapy over the past 12 months to help them cope with work-related stress. (That said, the data doesn’t reflect the number of respondents who were already in therapy.)

Adding fuel to the fire, 68% of respondents said they’ve been getting less sleep over the past 12 months than they did last year. A closer look at the data revealed that a whopping 86% said they’re getting 7 or fewer hours of sleep each night. On top of that, 30% admitted to getting 4 or fewer hours of sleep a night. It’s unclear from the data whether the respondents’ lack of sleep is causing their burnout or is, in fact, the result of it. Regardless, what is clear is that our healthcare workers are struggling right now – and it’s taking a toll on their health.

Overall, female healthcare workers seem to be struggling more than their male counterparts. When asked about their psychological well-being, half of all women surveyed said that they feel worse about their mental health, compared to only 36% of men. In the same vein, a little over half (54%) of all women admitted to crying at work over the past year versus 22% of men. Additionally, 49% of female and 40% of male health providers surveyed have thought about leaving their jobs.

Older healthcare workers aren’t faring well, either. A little over half (52%) of respondents who identified as being 45+ years old felt that their mental health is worse now than it was this time last year; that number jumped up to 66% percent of respondents above 60. (This is compared to 48% of all healthcare workers of all ages.) Additionally, 55% of respondents aged 45 years or older said they’ve considered quitting, changing careers, or retiring altogether. Again (and perhaps unsurprisingly), that number goes up to 71% of providers above the age of 60.

Their work performance is suffering & they’re thinking of quitting.

While the stats on healthcare workers’ mental health are troubling on their own, the news gets even more concerning when you look at the impact it’s having on their job performance. For example, 1 in 3 healthcare workers feels like they’ve been making more mistakes at work over the past year. Additionally, half have considered either retiring, quitting their jobs, or changing their careers altogether.

Again, if you are feeling the effects of the pandemic, you are not alone. Self-care is important any time, but it is especially important during the pandemic. Here are some great articles with advice and tips on self-care.