Coronavirus through kids’ eyes: Understanding and explaining the unseen monster in the room 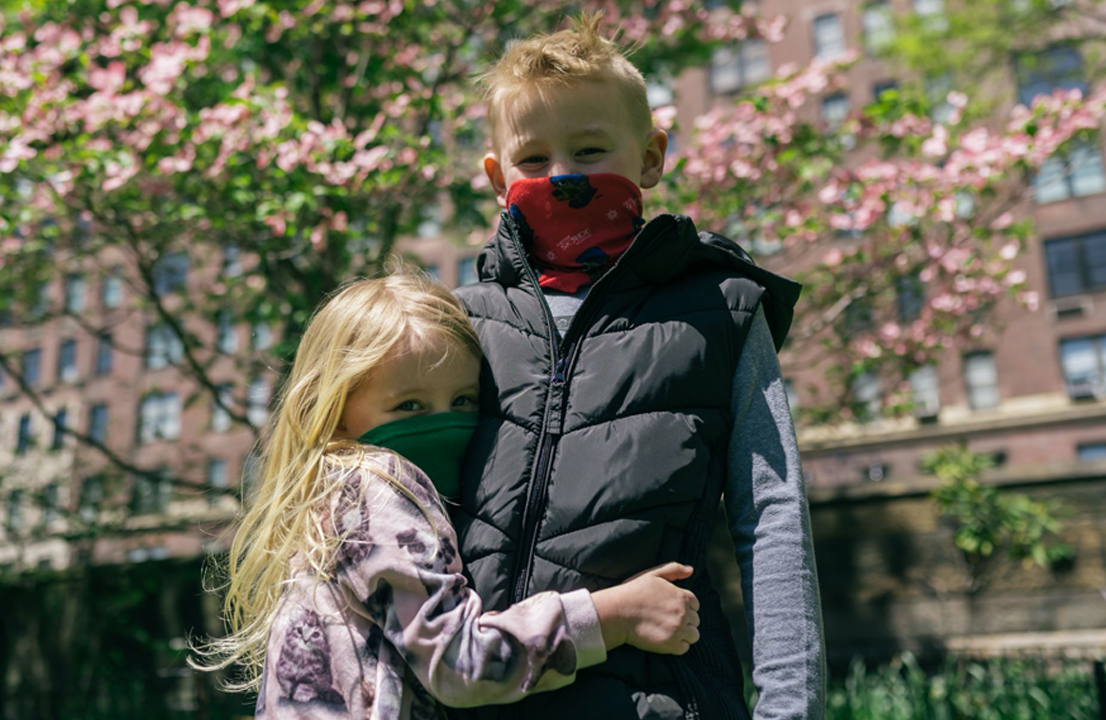 Before coronavirus, 5-year-old Willa Carmenini wasn’t worried about monsters under her bed. Now she’s asking about them every night at bedtime, and she doesn’t like going outside her New York apartment.

“She says it’s the mask,” says her mother, Andrea Saraffian, though Saraffian suspects it’s more than that. It’s the rules about touching elevator buttons or avoiding friendly neighbors in the lobby. It’s the stress that her parents try so hard to hide.

Before coronavirus, 4-year-old twins Lilybelle and Adam Mrabet would run to hug their father when he walked in the door after working at the family restaurant in Harlem. Now, they must wait until he strips off his clothes and showers to avoid exposing them to the virus.

“It’s a bit sad to see them learn to be so patient at such a young age,” says their mother, Gloribelle Perez.

Six-year-old Walt Grahlman got sick with COVID-19 and had a fever of 102 degrees for a week. His parents got sick, too, and lost work in his physical therapy practice and her work as a creative director. Now that they have recovered, Walt calls having Mom as a teacher “silly.”

He never used the word “hate” before, but he hates coronavirus.

“Mama, this is your longest day off ever.” – Willa Carmenini, 5

If the coronavirus pandemic seems confusing to adults — and it is, even at the highest levels of government — imagine how it might seem to children who have suddenly lost their school, their connections with friends and grandparents, and even their ability to play freely outside.

To them, coronavirus is like an unseen monster under the bed. What no one knows yet is just how sharp its fangs are.

Interviews with dozens of parents and children across the country show the extent of the strain and difficulty for children. Some worry about the potential for lasting trauma. But they also point to promising signs of resilience. Sibling relationships strengthened. New traditions embraced. Family bonds, cemented.

“There will definitely be change, and we’re all kind of holding our breath to see what it is,” says Dr. Tovah Klein, author of “How Toddlers Thrive.” “It’s clearly going to be part of their narrative and their life story and where they started out, but the question of whether it becomes part of the story and springboards them in strong ways or hurts them, that hasn’t been written yet.”

Ask children about the pandemic, and responses range from frustration and anger to sadness and fear, boredom and loneliness.

Four-year-old Hazel, whose mother asked that her last name not be used to maintain her privacy, sometimes cries remembering “the good old days” when she could play in parks and go to her school in Portland, Oregon. Recently, she felt the need to confess when she forgot to cover a sneeze.

Sometimes Lilybelle points at objects like books or toys and wonders if the virus is on them.

Several parents said their children asked about the Easter Bunny or Tooth Fairy getting sick, or wanted to know if the elves were still making toys for Christmas.

Many children are worried about their older relatives, and wonder when they’ll see them again.

“I think about my grandparents sometimes, like what would happen if they got it?” says Oona Girton Marshall, 13, of South Orange, New Jersey. “I think we’re going to have to take care of our elders.”

They want to know when they can hang out with friends. Will they be able to go to summer camp? Will they take a family vacation?

More than anything, they want to know the answer no adult can tell them: When will all this be over?

“I worry they will be co-dependent on each other for a long time after since they only have each other to play with AND they share a room.” – Julie Lamb, mother to Wyatt (4) and Walt (6).

Children who are feeling stressed or anxious now might not be able to describe those feelings, says California Surgeon General Dr. Nadine Burke Harris, a pediatrician and expert on child stress.

“They might not be able to name their feelings and it just shows up as trouble sleeping or difficulty with impulse control or feeling a little bit more irritable,” she says. “For some kids they really feel it in their bodies.”

Parents report that their toddlers and young children are clingy and having more potty accidents or sleep disruptions. They’re asking for extra attention. Teenagers are pouting and slamming doors like cranky toddlers. They’re regressing, a common sign of stress for children.

More than half of parents in a recent survey by the education company Pearson said their children felt anxious or depressed during the pandemic. Eighty-nine percent said the pandemic added to stress and anxiety for children overall.

That’s even more concerning because anxiety and loneliness were at all time highs for teens before the pandemic, says Dr. Jean Twenge, author of “iGen: Why Today’s Super-Connected Kids Are Growing Up Less Rebellious, More Tolerant, Less Happy — and Completely Unprepared for Adulthood.”

“Starting around 2012, adolescent mental health took a really negative turn. Depression started to increase, happiness started to decrease, life satisfaction went down and loneliness shot up,” she says. “You can’t think that this situation would have made things better.”

Many kids have found themselves frazzled by distance learning. Young children have little patience for Zoom meetings, and older children are struggling with motivation. Parents worry about students who were already struggling falling further behind.

“It is basically all of the worst parts of school without the good parts,” says Charlotte Strickland, an 18-year-old high school senior at Packer Collegiate in Brooklyn Heights. She doesn’t know if she’ll ever get to say goodbye to her fellow graduates. “I find it very hard to focus in class or on my homework, and to care about what we are learning.”

Screens have become constant companions — the place where school and socializing happens, in addition to the usual diversions and games. Every parent interviewed by TODAY confessed to a jump in screen time.

Hamiz Qadri, a 17-year-old junior at Queens Technical High School, says he now spends 8 or 9 hours a day on screens. He’s video chatting and playing multiplayer games to stay in touch with the friends he misses from school. “We’d much rather be in person,” he says. “For now I can’t see myself getting sick of (screens), but that’s definitely a possibility in the future.”

The lack of social connection weighs heavily. Some parents fear their children who were more reticent to begin with won’t know how to relate to friends anymore.

“My mom told me to stay 6 feet away,” says Logan Barnett, 11. “It kind of limits me. I’m a more of a friendly person and I’m used to hanging out with my friends, putting my arm around them, and now I can’t really do that.”

Not all children are experiencing the same crisis. For some, the months of school closure might be remembered as something like an extended snow day. Several parents referred to this extra time together as “a gift.”

They see the extra time as an opportunity to tune into their children’s learning, or for siblings to bond. Their children may be learning to play more independently, to bake or help out around the house.

Young children might even be delighted to get more time with their parents. Willa, 5, calls this Mama’s “longest day off ever.”

But younger children also may not understand why they can’t play at a playground or see friends. And they are frustrated not to be the center of attention, Klein says, when parents are with them but caretaking isn’t their only objective. If parents are juggling work with childcare, children might feel lonely, bored, or worse.

Older children, on the other hand, were already enmeshed in social media and online entertainment – with an average of six hours of screen time a day, Twenge says. Jennifer Miller, a family educational consultant and author of “Confident Parents, Confident Kids,” says her teenage neighbors joked that they had been rehearsing for this: They’ve been socializing online for years.

But teenagers also have alarming levels of anxiety and depression, and further holing up with screens might exacerbate that. Some are frustrated to be kept from their friends and bored by home-school.

The children Burke Harris worries about are those who were already most vulnerable: those in unstable families, who are economically on the margins, or who have other risk factors for trauma. For those who lose family members or a living income, it’s undoubtedly a catastrophic event.

Burke Harris says those children would be more likely to show difficulty with impulse control. They may struggle with moods or angry outbursts, or become withdrawn. And trauma affects their health, too, putting them at increased risk for frequent infections or diseases like asthma and diabetes.

Twenge, who studies generations, says the effect of the pandemic might be similar to that of the Great Depression. The children who grew up then were frugal for their entire lives. Burke Harris expects we’ll have “a generation of hand washers.”

“They may live with more anxiety around health,” Twenge says. “We might find in 50 years that when kids and grandkids come to clean out their basements, that it’s filled with toilet paper just in case.”

And yet, experts see cause for optimism for today’s children. It’s a time of stress, but one that families can emerge from stronger.

“If they have a loving family, even with the stress, and they get through this, the lesson learned is that this was really, really hard (and at times scary) and my family was there for me, as best they could be, and I am OK.  We got through it,” Klein says.

“This is the place where coping and resilience start.”

The rise in together time means children are embracing new traditions like family game nights, and siblings are becoming friends.

“All four of my kids have gotten closer,” says Mandy Smart, of Erda, Utah. “There are certainly rough moments too, but I have been pleasantly surprised to see them joking and having fun with each other more often.”

Experts are optimistic that children might become more self-directed and able to play (and think) more independently.

They may see the stories of hope and help – the people making masks for health care workers, or putting up signs of support – and be influenced to come together or show compassion.

“My hope is the young generation will say, hey, we can do better than this,” Twenge says.

And parents are celebrating the gift of something many working families say they don’t often have: presence.

Laura Ward, the mother of an 11-year-old and 13-year-old in Portland, said she realized on a field trip last year that in some ways, teachers and other students might know her kids better than she did, because they see them for so many hours, in so many situations.

“Now I get to be present with them for much longer and watch them work and grow,” Ward says. “From this tragic situation, at least we have that.”