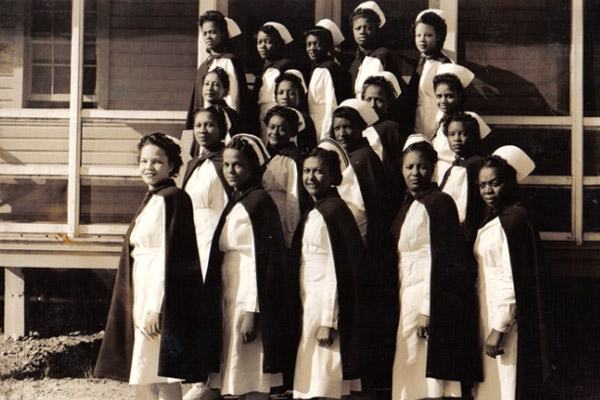 The Department of the Army was dragging its feet on allowing women of any race into the Army Nurse Corps (ANC)–that is until the United States entered World War II and there was a shortage of nurses. Approximately 29 black nurses served at TAAF. The segregated Army had limited black ANC nurses to around 500 more or less during World War II. That was out of a total 50,000 Army Nurse Corps nurses who served during this war.

In November 1942, during World War II, the number of patients was increasing at the Oteen Veteran’s Administration Hospital. For that reason the Department of Veterans Affairs transferred nine African American nurses from Tuskegee U.S. Veterans Hospital 91 in Alabama to Oteen. By January 1943, an additional four nurses joined them. The Tuskegee hospital, founded in 1923, operated with black staff for black patients. Both Tuskegee and Oteen veteran hospitals concentrated on tuberculosis and mental health. The transferred nurses would work with African American patients. Ten of the nurses had worked over ten years at the Tuskegee hospital. All of the nurses had been trained at nursing schools and in hospitals across the eastern United States. Head nurse Elsie V. Davis was trained and worked at Michigan’s Battle Creek Sanitarium in 1920. Others received training at Grady Hospital in Atlanta, Freedman’s Hospital in Washington D.C., and the Lincoln School of Nursing in New York City among others.

We Salute and honor your contributions to the profession today and every day.